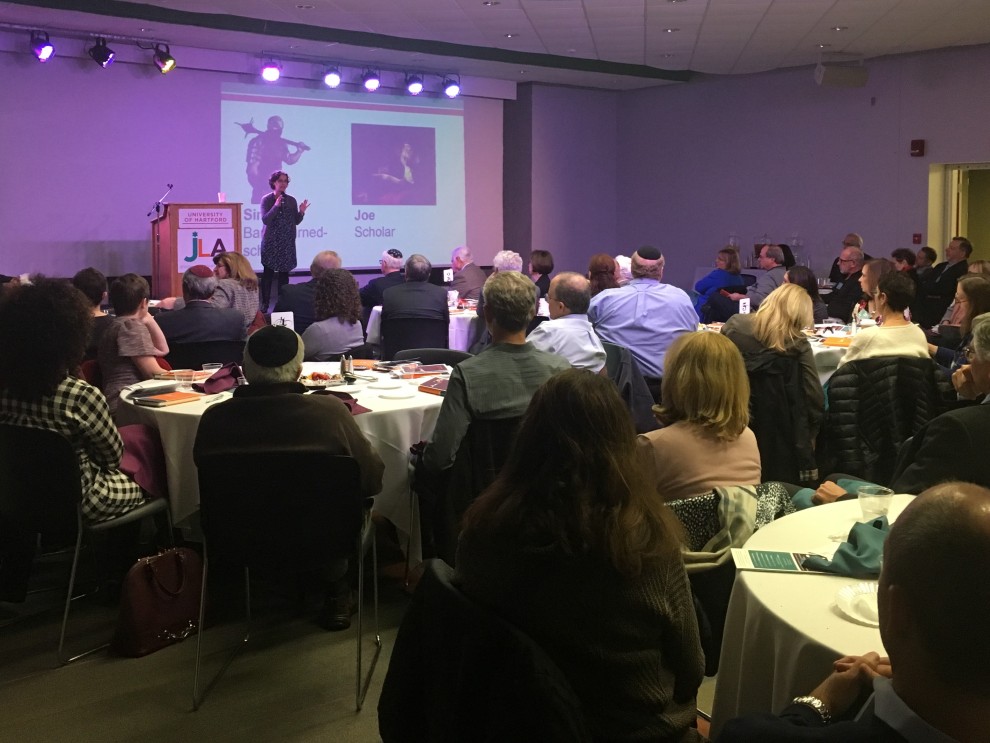 West Hartford, Conn. (December 11, 2017) – Nearly 200 people gathered for a community program on civil discourse co-sponsored by the Jewish Leadership Academy and the Jewish Community Relations Council of Greater Hartford.  Held at the University of Hartford on December 6, 2017, this interactive workshop with nationally renowned teacher Rabbi Shira Stutman focused on civil discourse at home, in the office, and out in the community.

The focus of the evening was not on changing people’s minds, but on hearing them. In a time of increasing polarization, learning how to listen and how to speak respectfully are critical skills to deal with the multitude of controversial issues that confront us on a daily basis.  In her presentation, Rabbi Stutman used rabbinical texts as the starting point for both interactive table discussions and follow-up exercises on listening and dialogue.

This program was the official kickoff of the Jewish Leadership Academy (JLA), a new initiative designed to train leaders and build a more vibrant, connected and vital Jewish community in Greater Hartford. It was also the first program in a Year of Civil Discourse (YCD) initiative of the Jewish Community Relations Council, part of the Jewish Federation of Greater Hartford. The goal of the series is to establish an environment in which difficult issues can be discussed and addressed with respect and inclusivity.

A recording of the event can be found on at  http://bit.ly/2BTwfsG. To learn more about the Jewish Leadership Academy, contact Heather Fiedler, Director, at 860.727.6121 or hfiedler@jlahartford.org. For more information on the Year of Civil Discourse, contact Laura Zimmerman, Director, Jewish Community Relations Council, at 860.727.6167 or lzimmerman@jewishhartford.org.

The Greater Hartford Jewish Leadership Academy (JLA) strengthens existing leaders and trains new leaders to ensure that our Jewish community is powered by knowledgeable, collaborative individuals who are prepared to act with vision.  JLA uses a community-wide, systemic approach to provide participants with the skills necessary to inspire and engage others and to build a more vibrant and vital Jewish community. JLA is developed with support from the Jewish Federation of Greater Hartford and funded by the Jewish Community Foundation, the Auerbach-Schiro Foundation, Lea and Richard Rubenstein, and Sandy and Arnie Dashefsky.

About the Jewish Community Relations Council

The Jewish Community Relations Council (JCRC) of the Jewish Federation of Greater Hartford strengthens community, pursues social justice, combats anti-Semitism and supports Israel in the Jewish and broader communities. JCRC builds coalitions; convenes broad discussions on historical, contemporary and emerging topics; serves as an informational resource to the media and community members; and advocates on issues important to the Jewish community.

PHOTOS
For our gallery of photos please visit our Facebook Album at http://bit.ly/2jCjy1f